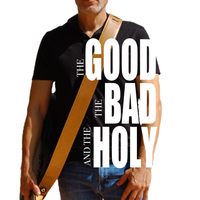 From the recording The Good, the Bad and the Holy

Oy, holy people here we go!
Try remembering when Joshua would win a war,
We’d owe it to the Man and not our hand.
Every time we win a war we’re as faithful as a whore,
runnin’ around with other gods,
with foreign women, and what’s more,
God is faithful all the time but He pays us for the crime,
letting us lose a piece of land every time we stray again.
But if we come back, He’ll lead the attack,
We’ll be his people and He’ll be our joy,
but if we forget we’ll soon be met
with the foreign rod he will employ!

CHORUS:
Holy People, the Canaanites put up a fight
to keep the Promised Land.
Oy! Chosen People, the Philistines are pretty mean.
We’re doing the best we can.

Oy! Lil’ Debbie cut the fudge! God anointed you to judge
while we fight the Canaanites
if we just keep Him in our sights.
Why you need so many men, Gideon?
Let’s try it again with fewer troops and
maybe then you’ll see the victory in the end.
Check out Samson with the hair,
he’s the guy to take us there!
But Delilah had a plan: Cut the hair, betray the man!
But it grew back, he led the attack,
he pulled on his chains, and what do you know,
He took out a bunch of Philistines
but back and forth we go. Oy! (Chorus)

Oy holy people, before there were kings,
Chosen people, you did your own thing.
Holy people, the trouble you bring,
Chosen ones! (Chorus 2x)